This week I believe it’s a diving.

I can now see many things, subtle and seemingly extending to somewhere abyssal.

In this week, I have tried transforming the natural language questions into SPARQL queries via the trained neural SPARQL machine models, which showed the restrictedness in the vocabulary mapping.

To trace back, I noticed that the Spotlight annotation might focus on the entity recognition based on the word-wise input. Thus, the entity consisting of more than one word could have been missed.

What’s more, with the helpful advice, the project is moving forward an insightful and pioneering direction.

1.1 The Mismatching While Trained Models Work With Unprecedented Vocabulary

if we use the model trained on dbo:Monument templates set to infer the questions of the topic about location that contains the vocabulary that it had not learned in the training data, like: the “rdf:type dbo:Place” and the “dbo:location” are the two of the most frequently abused in the inference for those vocabulary unprecedented.

the generated result was

where apparently the “dbr_Rugrats” and “dbo_composer” are not related to the question, also, the crucial entity about the person named “Xu Fan” and the entity “dbr_Xu_Fan” has not been properly recognized, not matching to the correct paired query

I got some feedback from the researches in NL2SQL that major in deploying reinforcement learning method in training the neural model to get more and more correctness in the returned answers.

To elaborate on this direction of researches, the paper MAPO (Memory Augmented Policy Optimization for Program Synthesis and Semantic Parsing) [2] on NIPS 2018 is worthy of our attention.

MAPO is a method based on weakly supervised and intensive learning. In the paper, it transforms the NL2SQL task into an intensive learning task based on the basic composition of the NL2SQL task and the basic elements of reinforcement learning. In MAPO, the state of reinforcement learning x is seen as the natural language problem of input and its corresponding environment (e.g. an interpreter, or an knowledge graph or, typically in the experiment in the paper, a database), and the action space A of reinforcement learning is regarded as all possible collections of programs under the current natural language problem. And each action sequence a of the enhanced learning trajectory corresponds to every possible program.

Since our task is to generate program statements, we can easily run the generated program in the real environment and compare the result with the label of the weakly supervised training data to get the 0-1 binary return function. Its core idea is to correct the behavior of the agent by interacting with the environment, so as to achieve the effect of “learning”.

Based on the above-mentioned intensive learning ideas, in the specific implementation, MAPO proposed the following innovative solutions. First, in order to improve the efficiency of training, the MAPO algorithm stores the sampled high-reward program into a Memory Buffer. When training the strategy function fitting network, the objective function that maximizes the expected return is divided into two parts, one is The expected return of the sampling program in the Memory Buffer, and the other part is the expected return of the sampling program outside the Buffer, as shown in the following figure. 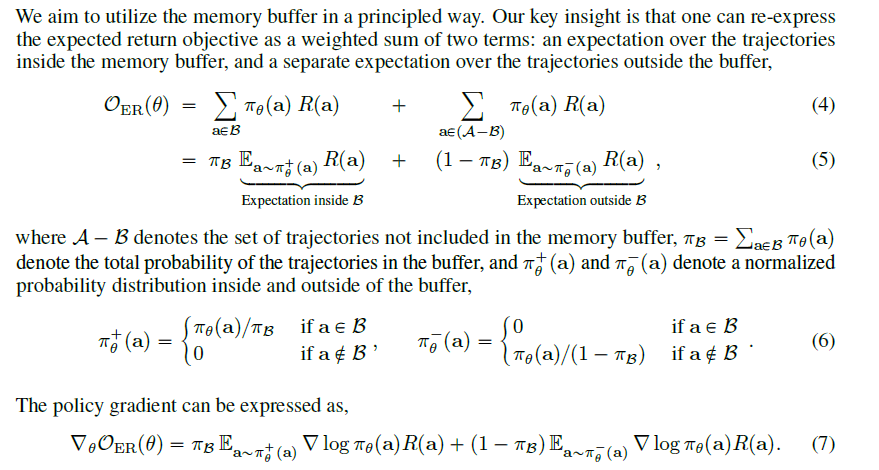 The team[2] applied MAPO to the WikiSQL dataset. For each sample on the WikiSQL data, 1000 sample programs were generated. Five high-return samples were stored in the Memory Buffer. The GloVe embeddings was applied to the strategy function fitting network. LSTM Hidden The unit is 200 and the training is 15000 steps:

The learning of the connection between the the natural language question and the structured query is the major objective function, where the task is designed to let the query fit as much as possible during the machine translation training.

While parallelly, the researches in NL2SQL have a comparative stronger emphasis on the result that the generated query would return and on the correctness that it would produce, because the correct return of the query is their only goal, not the matching similarity of the queries.

That’s to say, their models tend to build a more direct function from the natural language question through the generation of the structured query finally towards the return answer, based on which this type of algorithms of reinforcement learning get the reward upon the right or wrong of the result of the generated query then learning to let the query generator get the more and more pertinent returned answer.

To sum up, the machine translation based-model is query-driven while the reinforcement learning model that tries to take a step further can be classified as a final-answer-driven method.

However, in this type of final-answer-driven models, there’s a pre-requisite that requires to embed the natural language questions, the structured query, and the answers entities into a calculable form while working with our problem.

So, how could we remove the limitation away from the current model?

There are two aspects to be paid attention:

1) Uniqueness and Directivity: The embedding vector must be unique in terms of representing the entities, otherwise there could be conflicting mapping. And it must be promising that, in the vector space, each entity-vector pair must be correctly matched in one unique key-value pair.

2) Comprehensive Inclusion: The vector set should, comprehensively and accurately, comprise all the entities and relation properties in the DBpedia space, with inclusion in the embedding of the keywords of the query grammars, e.g. “SELECT”,”DISTINCT”,”WHERE”.etc.

After the attempts in training a new vector set on the given templates, I figured out that it might be of more efficiency employing the DBpedia embedding vector of the previous projects.